Hitting a Home Run against Malaria

Recently, a group of Jewish adolescents organized a community initiative called the Intercamp Classic. The event involved hundred of Jews, who participated both as players and fans. 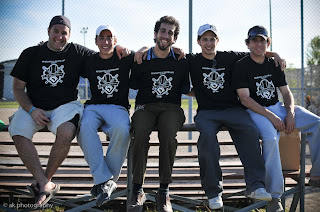 The charity softball tournament was held at the Powerade Centre in Brampton, Ontario Sunday, May 16th, and featured 20 different camp teams, 8 in a high school conference, and 12 in a university/alumni division. Teams were asked to raise a minimum of $800, and each team surpassed the goal, many fundraising into the thousands.

An online fundraising website made it easy for family and friends to donate. Collectively, the over 220 Jewish players in the tournament, primarily from Toronto, raised $36 000! This money will be matched by the former UK Prime Minister Tony Blair as part of his Faiths Act Initiative. The matched total of over $72 000 will be given to Project Muso, which provides mosquito bed nets and comprehensive health care to help treat and prevent Malaria in Mali, West Africa.

Thanks to great weather, the day itself was an incredible success! Over 300 Jewish fans came out to enjoy a day of softball, food, snacks, a raffle, silent auction, and entertainment including performances by an All-Star Intercamp Dance Park and inflatables courtesy of Hart Entertainment. All money raised on the day of the event will been given to UJA’s Top Bunk camp incentive grant program.

Shown in the picture above the organizers: Josh Howard, Noah Sliwin, Danny Richmond, Michael Grundman could not have been happier with the money raised and the turn-out at this year’s event. They cannot wait for the Intercamp Classic in 2011!

Guest Voice: Josh Howard
Posted by Heebonics at 10:48 AM

There's so much more to see!